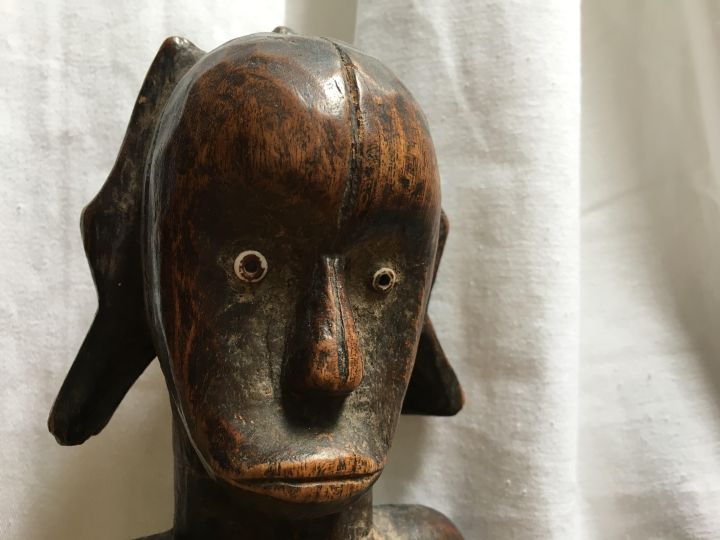 They are more than only guardians of reliquaries. They are interfaces between the living and the dead, between men and gods, between darkness and light. Originally, they are only wooden statuettes depicting children, embedded in the depth of a reliquary basket (ethnic Fang). They are offered perfumed oils, cereals, sometimes blood, to maintain their effectiveness and to fight against forgetfulness. Some of them continued to sweat still, almost a hundred years later, in the museums, like a fetish that bleeds.

But the most interesting is his eyes, round, white, motionless and evanescent. They are the only physical part of the dead who remains visible externally: buttons from his funeral clothes, or fragments of bone reshaped in the form of eyes. In any case, they act as a periscope: all that is visible outside is automatically and without delay transmitted within, that is to say to the bones of the dead. It is then up to him to provoke magical manifestations if he deems it necessary: ​​possession, convulsions, fall of a tree, a cloud of insects, etc. Such reliquaries, kept in the secret of a hut of the dead (in a private dwelling), are ritually issued for funerals, marriages, births, lawsuits, sowing and harvest. All the moments of transition when truth must be expressed, except in Africa, the truth does not come from the mouths of children, but from the eyes of the dead.