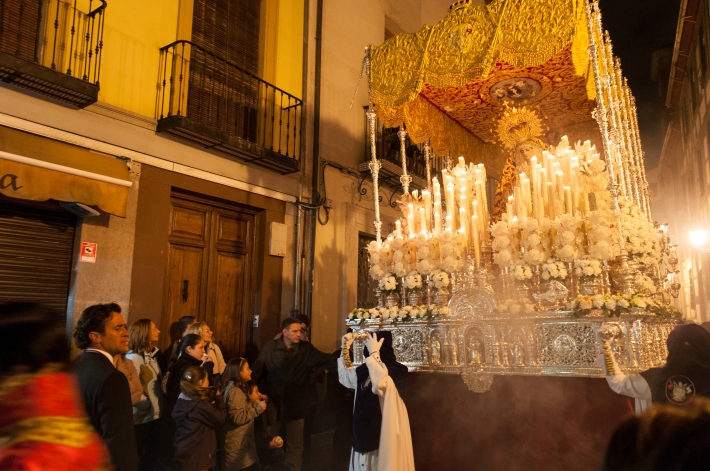 Holy Week in Seville, Andalusia is the archaic manifestation of a symbolic death and rebirth. It follows the line of ancient processions such as one that met daily in Athens, Rome, or Alexandria. Each district of the city assembles to celebrate a mythical legend, to honor the memory of a man-god and, through him, the cycle of rebirth.
As for the Palio of Siena, Italy, which is also a manifestation of neighborhoods and unification, it assembles disparate groups of the population under the sole banner of a religious event (or sports … under the authority of religion, which is present the whole time).For a week, from Palm Sunday to Easter Sunday, dozens of processions follow each other led by a total of sixty brotherhoods. They all leave their headquarters (chapel, church, historic building), make several stops to remember the memory of a milestone in their history, or focus on a part of the legend of the Passion of Christ (this week which preceded his symbolic death); then they have a mandatory course in the city center and especially in front of the town hall (a way to mark the submission of spiritual power to the temporal power, or vice versa since it is not known which one offers respect to the second); then they end their trajectory at the cathedral, the ultimate goal, the consecration or, to use a religious term, the apotheosis (literally, the junction with the deity). Well finally the return to the starting place, in an extremely simple way.

Each brotherhood (cofradias) is led by a major brother (Hermano major). Sixty brotherhoods, and probably as many ways to mark the joy, the mourning, the fervor, the hope, the belief, the faith, the hysterical intensity of some, the silent recollection of others. Each brotherhood has its own history, its own tradition. Some are made up of children, showing the trans-generational character of these children. It has one or more altars (pasos) that are worn on men’s backs along the way. We find here the character of the transcendence of self, but also of penance: just like Christ who suffered during these seven days of passion (the instruments of it are many tools of torture: hammers, nails, pincers , ladders, crosses, spears, sponges soaked with vinegar at the end of a branch of hyssop, crown of thorns, column, sword, reed, whip, cup of a bitter drink, etc.), the members of the brotherhoods must also suffer, in full communion of this suffering: perhaps there is a possibility to touch with the end of the fingers (of the end of the sweat and the blood?) the divinity, to approach it. Those faces that are suffering, writhing with pain, those naked torsos flogging, those drops of blood that bleed wounds are totally voluntary, hoped for, accepted, consented to. These are crossroads between humanity and divinity. There are other means developed by the participants of these brotherhoods to get closer to the Christian ideal: education (catechism), worship (Eucharistic celebrations), charity (charities) … but none is as demonstrative as the Holy Week. Present in each confraternity are the penitents (nazarenos) dressed in a tunic and an extremely pointed hood (capirote): we are here in a totally medieval style of dress, which indicates the deprivation and recalls the darkest hours of the Inquisition. As in the secret societies, it seems possible for the member of the brotherhood to progress, to rise in rank, that is to say to assist and to concretize not only his seniority of belonging, but also his personal journey, of grade in grade, degree in degree.

These processions are voluntarily impressive. The spectator – or rather the devotee – must feel overwhelmed by the weight of religion. All senses are awakened: hearing (silence deafening for some, ritual music for others, sometimes accompanied by liturgical chants sung by anonymous to the balconies along the way, dressed in gala costume); the touch (one presses to kiss the feet of the baroque statues that are part of the portable altars, the ground trembles and the music is strong, makes the body of the participants resound); the sight (golden gilding, velvet glitter of participants’ clothes, etc.); olfaction (smell of candles that burn, incense smoked along the way, taste (Lent prevents a gustatory celebration and this meaning is deprived of any appreciation: it is hidden, put to rest, deprived of any stimulation).

It is the whole of the streets, and of the city itself which ends up being purified, traversed literally by the crowd of brotherhoods and pious effigies. It is like the city plunged into its own roots (churches) something to regenerate for a year. A system comparable to ancient processions that carry the word of God, the images of God, the emanations of God out of his sanctuary, making the city itself a giant sanctuary. There is this side of overflowing, purifying deluge (deluge of men and holy objects, rather than water, but always with this character of death / suffering then of rebirth / cicatrization-healing).

The parade of the brotherhoods takes place day and night, divided according to an unchanging ritual (only the courses change – a little – from year to year, except the two ends and the passage in front of the town hall. The unreal light of the torches and candles, in full darkness, reinforce this magical character, and all hours are covered by the parade, as if during this Holy Week, all the space but also all the time were sacred.

Holy Week is the expression of a memory, as well as a demonstration of the strength and power of (awe inspiring) religion and consecration. These are the three elements that are present. In addition, it allows the establishing of unity of a city around an event that is essentially fusional: the death of Christ, then its rebirth. The conflicts peculiar to the city are erased, the differences are expressed (in a ritualized way by the different costumes, the different ways to pay homage to the divinity) and then fade away, smooth, merge. Under the clothes of the participants, impossible to feel the slightest socio-economic difference: there are only brothers, like, “unity in diversity” = E pluribus unus). Each year, in a cyclical way, expresses this monumental submission to divinity and this means of social cohesion and global protection of the city.

For psychoanalysts, there is another reading of this week of celebration, which is linked to a complete cycle of magico-religious rituals in the city: “From the murder of Our Father Jesus during the Holy Week to the impulse of the desire found and mastered during the bullfight of resurrection, at the feria that celebrates the emergence of kinship, the rapture of the Virgin Mother to whom the pilgrim must finally give up, and finally, the festive consummation of the body of Our Father Jesus: the Andalusian people built, through their rituals, an original scenography of the Oedipal triangle. The Seville Passion thus proceeds by cleavage between the mise en scene of the myth and the enactment of the rite which suggests another narrative, not explained, that of the unconscious”.

The Semana Santa still escapes modernization, but for how long? No mechanization of tanks / portable altars. No electric megaphone to carry the voice of street singers. No ads along the way. So many details that would be unnatural, of course, since personal and anonymous effort is necessary in this pilgrimage or collective procession, but how can one continue to resist?