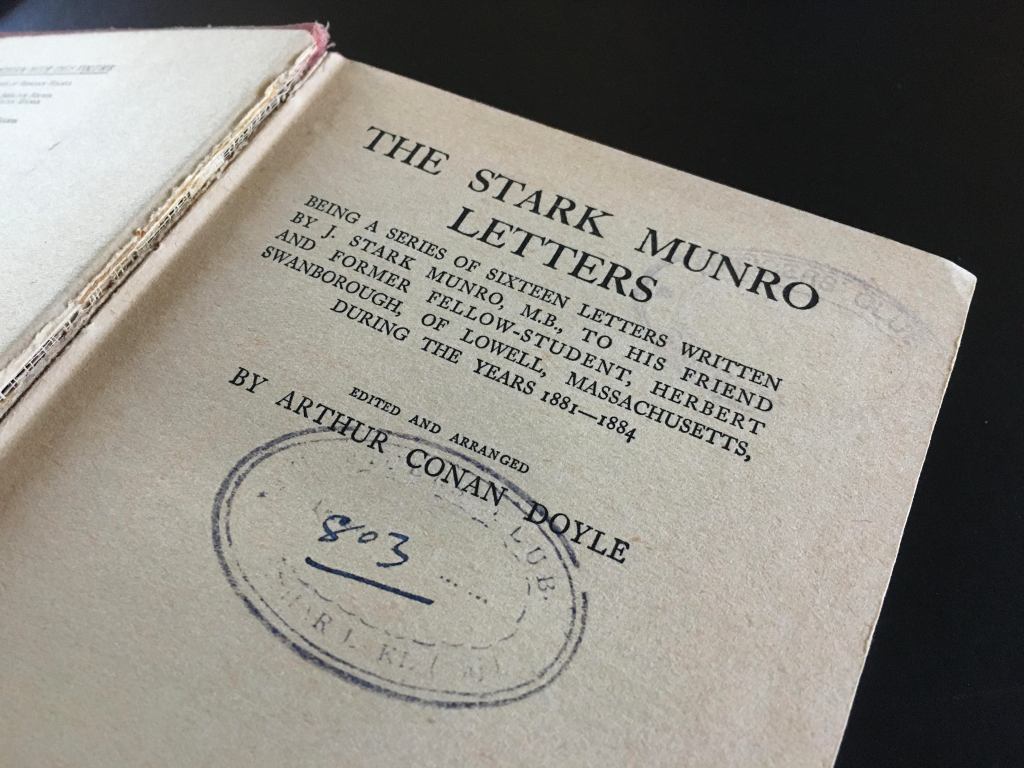 It is well written in Allan Kardec’s Book of Mediums that every object can be an intermediary between spirits and the living. Any object. A drink, an Ouija board, a sheet of paper. A book, too.

I had inherited one day from an old Rajasthani aunt many ancient works from a former British garrison lost in the Thar desert. These weather-wrecked works, in the corners eaten by the rats, and in between worm-eaten pages were still grains of sand from far away, there was a book by Sir Arthur Conan Doyle: The Stark Munro Letters (1934).

My choice was made. All that remained was to find the moment, the most appropriate time for the spirits to come to me. Re-reading Kardec, I learned that ghosts are more likely to visit humans when the day is falling, because when night falls, also fall ghosts, spirits and other creatures of the marvelous.

It was a stormy night. My house overlooks a small rocky promontory above the Aegean Sea, at one end of the island of Paros. It is said that this old hovel, a residence of captain of the long course, is haunted, but I had never paid attention to this legend which I suspected was used sometimes to increase the price of sale with curious occultism, as to dissuade any curious weakly interested by the real purchase of these walls attacked by the spray since nearly 200 years.

The sea was dismounted that evening, and whipped the foundations of the house that plunged into the water. The cable holding the boat to the hull covered with mollusks whipped the mooring bollard. The wind was raging, and lightning streaked the sky as in Dante’s verses. It was the perfect evening.

Alone, in my study, on the second floor under the roofs, I locked myself with my cat. All around me, books, worn out from having been read, covered with annotations. I sat on the floor, on an ageless carpet, a Kilim with geometric patterns. The cat was meowing like never before. The wooden floor grated, and the ceiling creaked as if the house was threatening to collapse. If a spirit were to speak one day in this house, it was that night precisely or never.

I took the book in my hands. I was barefoot, in gray linen trousers, with a white shirt with sleeves up to the elbows. A silver medallion hung around my neck, depicting the victorious Kali.

The book had a red cover, with a facsimile of Arthur Conan Doyle’s signature in the upper left corner. On the slice, one reads the library’s rating of the work (#518). While opening it, with infinite precautions, a few grains of sand fell into my hands, as usual. On the front page, one could see the stamp of the Sambhar Officers’ Club.

Which page should I use in the book? Was a spirit going to inspire me with a key figure? I watched if the book spontaneously opened on the same page, but when I tried, it was always a different page… Was a page horned by a previous reader? Not even. Did a bookmark indicate anything, except a marginal annotation or an ink spot? Nothing. The book was perfectly neutral. So I resolved to wait for the next flash, and to count the seconds between lightning and thunder: this figure would give me the page to use as a board of Ouija.

The next flash did not wait much. I began to count, in a low voice. My cat looked at me like a being of the greatest quirk… One… two… three… four… and so on for long seconds. The storm was going away… Twenty-four… twenty-five… Then a deafening din.

I opened the book on page twenty-five, as indicated by the higher spirits and the forces of nature, and I smiled, because the first word, at the top left of the page was “whispers”… The rest of the text was frankly banal, describing a residential area and interested in a certain Mrs. Cullingworth.

I closed my eyes, and dimmed the light by extinguishing my kerosene lamp, and lighting only a few candles. Their flames were flickering because of the wind between the window jambs and the old walls, but they held firm. Reading had become more difficult, but the atmosphere more conducive to this post-mortem dialogue.

With my right hand, my eyes closed, I caressed, the long index finger and the other folded fingers, the old paper on page 25. My cat began to meow. I stopped. My finger was on the word “not”, then a few moments later “gesticulation”. Did the spirit tell me I was moving too fast? That I was too fast? I replied, in a low voice: “Okay, I calm down, and go slower. First, what do you want? I then rested my finger on page 25. Two words were given to me: “answered” and “questions”. Either… I had read in Allan Kardec that the conjugation was not the strongest of the spirits, and therefore I did not take into account the times used, but rather the meaning of the word. I was going to ask him questions because that was what he wanted. He or she, by the way? This is the first question I asked myself: “Are you a feminine or masculine spirit? “. Answer: “of course” then “she”. A woman, then. So it could not be the long-distance captain whose house I was now living in. But maybe his wife, or his daughter? I had to ask more questions. “What do you want from me? Why are you here?” The mind answered by a series of words (perhaps page 25 did not have enough vocabulary to be precise enough?), very quickly, almost impulsively: “house”, “ground”, “old”, “husband”, “iron”… I confessed I did not understand… Then I felt the spirit that forced me to rest my hand on the page of communication, and three times in a row, my index finger pointed to the same word: “urgent”.

The storm passed, my cat meowing compulsively, and pressing against my waist, I understood that any exchange would cease or perhaps had already stopped. The most stopped, the wind fell, and I fell asleep soon after blowing the candles on the carpet, curled up with my cat in my arms.

In the morning, the five strange words that I did not initially understand began to make sense. They reminded me of this episode described by Pliny the Younger where a philosopher on a trip to Athens is stopped by a ghost whose clinking chains prevented him from sleeping several nights in a row. Having dug the ground of the house, he found the skeleton of the unfortunate (and his chains), offered him a burial and any supernatural manifestation ceased on the spot. Ghosts and spirits are not bad people, they just have a message to deliver. And if it was the same thing with this feminine spirit?

It took a little time to digest things, and this session had worn me out. It was only three days later that I helped an old shovel and, very quickly, with bare hands, I dug the sand on which was established the foundations of the house. In reality, it was built on piles of stilts plunging deep into the bowels of the ground. Between four of these pillars, at a depth of about one and a half meters, the sand suddenly turned red. I did not have any wounds on my hands, nothing could bleed, apparently. This red came from the sand itself, and this pigmentation was old. Twenty centimeters lower, a skull appeared, on which were still adhering a few strands of long, viscous hair, pepper and salt. Down to the bottom of the body, a midnight blue tunic with gold buttons depicting marine anchors covered a jagged thorax. On the right wrist (or what was left of it) was still attached a Piaget watch, whose big needle, by a strange strange spell, was still spinning. I removed it quickly, turned it over. An inscription had been improperly engraved on the reverse: “From Mrs Cullingworth, with love”.